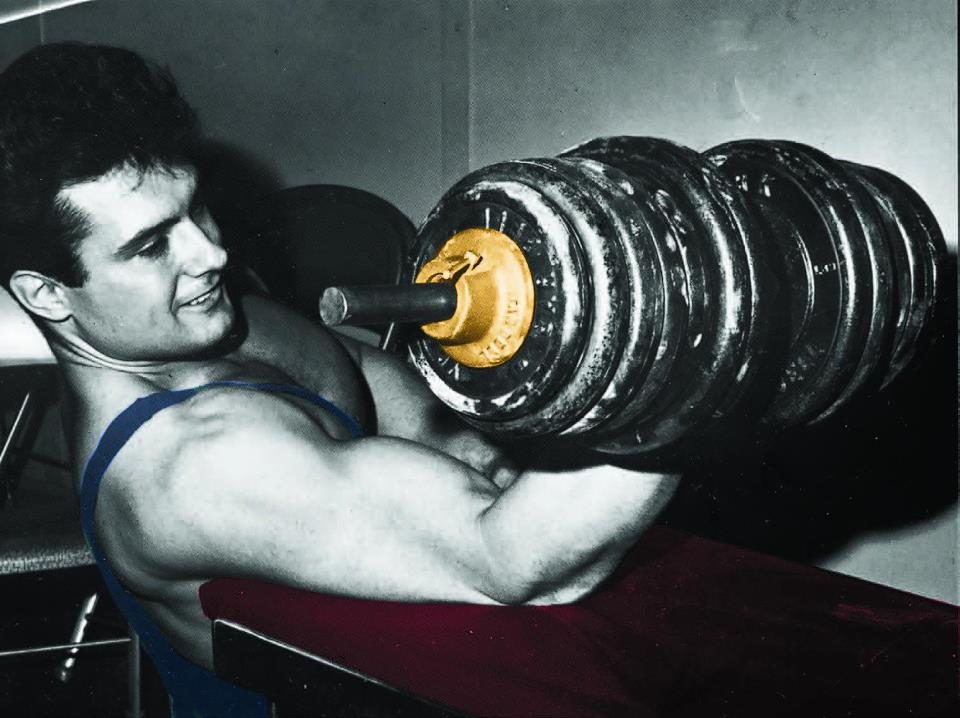 A vintage magazine article “Body Strength Enhances Arm Power” by Val Vasilef as it appeared in the December 1989 edition of Arm Bender, American Arm Wrestling Association: I recall the first time I was challenged to arm wrestle. Being fifteen, arm wrestling was new to me along with any technique that was used against an opponent I had to depend on raw power. Fortunately, my victory came easily and so did all my other wins up until I ran into an iron worker, Ed Montgomery, at the age of sixteen. Ed was hitting 25, weighed about 200 lbs. at 5’9″ in height and had a neck a bull would envy. He commanded a lot of respect with quite a following of worshipers. The excitement grew as bets were placed all in favor of big Ed. We sat down and gripped hands as my thoughts went into a frenzy. Can I beat this legend with hands as thick as meat hooks, forearms that resembled tree stumps? The self appointed referee shouted one two three go! With a surge of adrenal at its peak, I pulled and pulled for over three minutes with every muscle I could muster. My body began screaming with pain but I was gaining and finally 5 minutes later, which seemed like eternity, I became the champ. Talk about elation! All of you must know the feeling if you’re alive in this game. For over a week my body hurt from my neck right down to my toes which went into a cramp. Reflecting back why did I win? An amateur in pulling, less weight, smaller arms and shoulders than my opponent. Not to mention Ed’s many years my senior in arm bending. My evaluated conclusion at this unusual ability revealed that unknowingly I began training for arm wrestling at the age of twelve. Nudging being a teenager, a neighbor invited me over to watch him lift a 90 lb. barbell overhead with one arm. This feat impressed me considerably, only I didn’t have a barbell or funds to purchase one. But that was not a deterrent because I found two old metal buckets, filled them with cement and stuck a 1 inch thick pipe into the cement buckets thereby manufacturing my first barbell. Only draw back was, it weighed 110 lbs. which took all my effort, after many tries, to raise overhead once with two arms. Eventually with time and persistence I could one arm lift 110 lbs. 10 times overhead by the age of fifteen. Inadvertently my right shoulder, arm, forearm grip and right side of my body got stronger. By the age of 22 I was capable of cleaning and jerking 240 lbs. overhead with one arm. The clean (lift) to the shoulders strengthened my grip tremendously. Another favorite was chin ups. I progressed from 2 arm chins to 10 chins with one arm without the assistance of my left arm. My past and present experience proved the importance of strengthening the whole body. Arm strength and body strength must work as a whole. My program is easy and doesn’t take much time or special equipment. Start with one arm barbell overhead lift progressively with a light weight for 10 reps 3 sets every other 3rd day. Commence your chin ups with 2 arms placing a stool near your feet so you may step up as an assistant to force out last hard chins. Perform 3 sets for as many chins as possible. One of the most important factors, besides exercise, for acquiring maximum strength, fast gains, explosive power and endurance is the proper muscle and strength building supplementation. I’ve seen losers become winners due to the result of adding natural anabolic substances to their overall program. I was fortunate to know a scientist, Dr. John B. Ziegler, a pioneer in developing strength formulas and methods for world class athletes. Incorporating special muscle building formula to my program enabled me to increase my one arm strict curl from 110 lbs. to 150 lbs. My strength jumped immensely to where I upped my odds in pinning my opponents within 3 seconds or I would be declared the loser. Over the years, I have developed 3 of the most powerful natural anabolic formulas that are being used for muscle building, strength, fast gains and repair. MUSCLE IMPACT­ powder form drink – GORILLA NITRO – tablet form – and TOTAL RECOVERY – powder form drink. These products are now available through your gym or B.O.S.S. Bob O’Leary, under the company name ofVITOL.